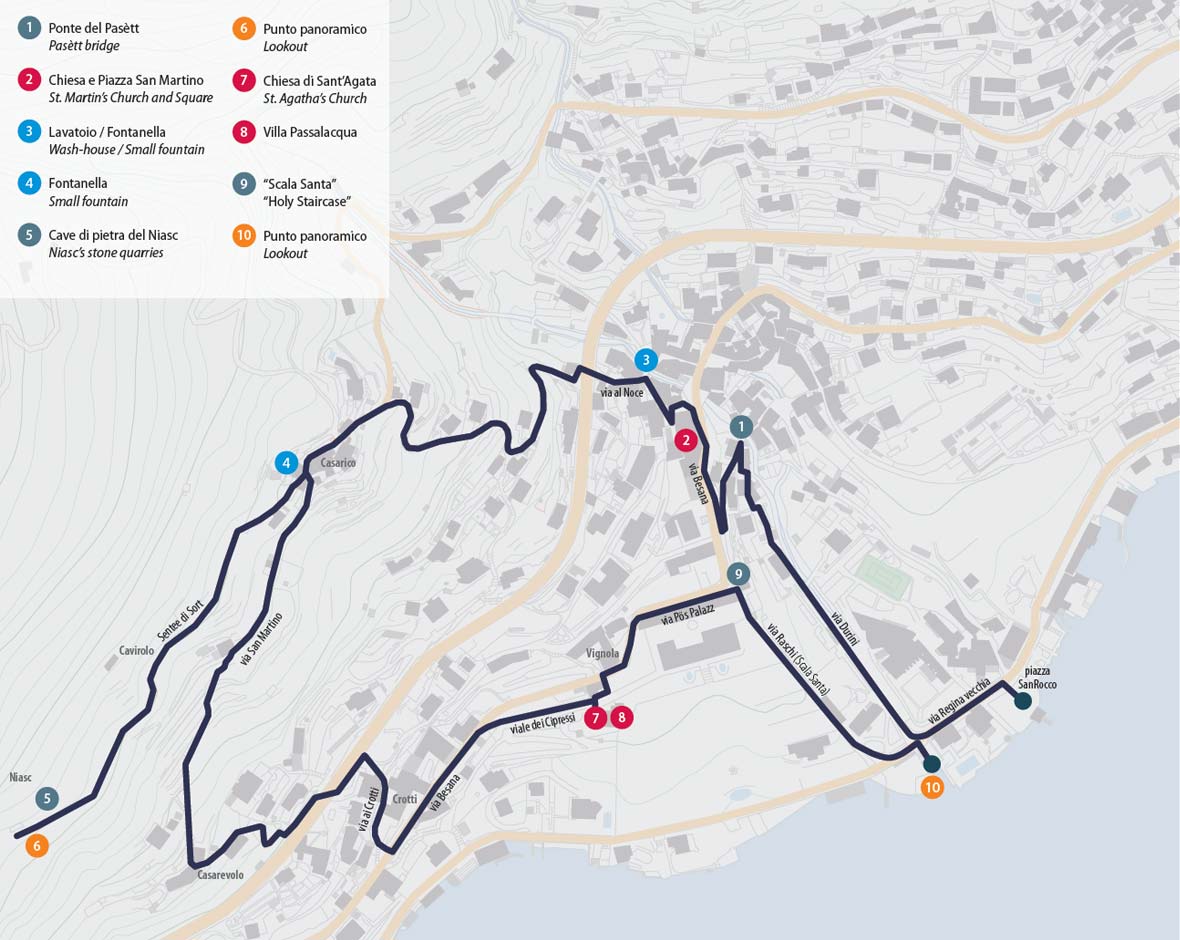 Pasètt Bridge, also called Rusca’s Bridge, is probably the most ancient bridge situated in the “Watermills valley”. The Rusca family was a noble family from Como and landowners in Moltrasio in the past. It is believed that the ancient route of Regina Street passed through these lands, and later it was part of a medieval road network, the Francigena Renana, which connected Rome with Northern Europe. More specifically, this bridge was part of the path that united St. Agatha’s Church, in Moltrasio, with St. Martha’s Church, in Carate Urio, both builded in the 1000 A.D. It was possible to admire the other bridges, now united forming the shape of a square, from the Pasètt Bridge. 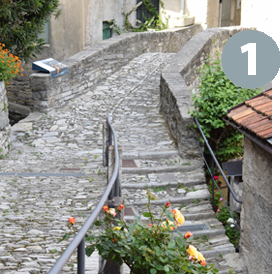 The Moltrasio’s parish church and its square are deeply connected not only because of their adjacent position and the same name, but because their current appearance is the result of the reciprocate transformations undergone on both the church and the square. Until 1923, in fact, the church was connected to the town hall through a cuert – meaning portico in the local dialect. From 1935 began the constructions to realize the square, to build Roma street, where there were the so-called “ponti di Borgo” (two bridges in the centre of Moltrasio) and to enlarge the church, because of the increasing population. 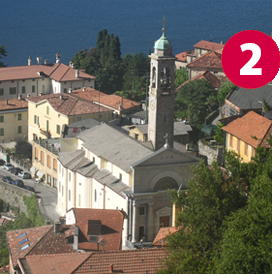 One of the main wash-house in Moltrasio, used in the past to do the laundry. It dates back to the early 20th century, built after the inauguration of the municipal aqueduct from which it received water. The wash-house is situated close to Umberto I’s square, just above the Pizzallo stream’s riverbed, along the so-called “Watermills valley”. The latest usage goes back to the 80’s of the 20th century. 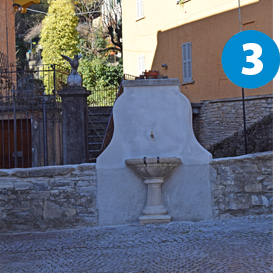 One of the 30 drinking fountains present in Moltrasio. Their construction began at the end of the 19th century, after the inauguration of the municipal aqueduct which brought potable water in some areas of the village. They were used also to quench the thirst, especially on warm days. Some drinking fountains, in recent days, have been restored thanks to the contribution of Associations and individuals. 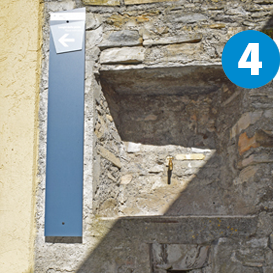 In Moltrasio there were 17 stone quarries in operation, among them, the Niasc’s stone quarry. The extraction proceeds had several steps: the dig, the extraction of the stone in blocks or slabs and the work of the stonecutters (called picapreda). Then, the stone were transported to the main lake on heavy wooden sledges (called carei) down the steep stony streets specially constructed with this purpose. Some of the manufacture they did were: dry-stone walls, internal and external pavings, roof coverings, curbs, slabs for balconies and tables, stairs. 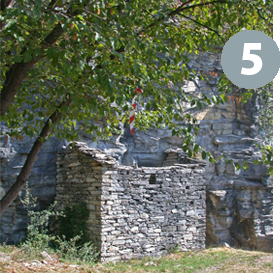 One of the numerous lookout points in Moltrasio from where you can admire a glimpse of the neighbouring villages and Lake Como. In particular, from this lookout point you can see Palanzo, Lemna, Molina, Faggeto Lario, Torno, Villa Tanzi Taverna, Villa Roda Roccabruna, Villa Taglioni, Villa Cademartori Mylius, Blevio, Brunate e Como. 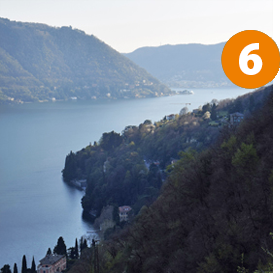 The artists behind St. Agatha’s Church were the Maestri Comacini (Masters of Como). The church dates back to the 11th century. The most evident modifications done in the structure were the expansion of the central nave, with the building of the minor aisle, and the construction of the current entrance. It was gradually abandoned until the 18th century, when the building began to be used as a lazaretto during the plague. In 2006, the restoration of the frescos led to a series of significant findings; in the minor apse, appeared part of a Christ Pantocrator between Saint Roch and Saint Anthony Abbot, that dates back to the 16th century. In 2014, the wooden Renaissance Christ was restored. 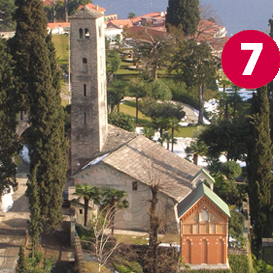 The initial building was commissioned by the Odescalchi family. Giovanni Battista Lucini Passalacqua, Decurione of Como, acquired the villa in 1756. His son Andrea commissioned the architect Felice Soave to draw a new design for the property. It included the complete restylement of the whole territory by adding staircases, water facilities and garden terraces supported by a subterranean structure with tunnels. The next owners, Alessandro Lucini Passalacqua, a great humanist, and his son Giovanni Battista jr., an Oriental art collector, embellished the villa, called at that time “Palazzo”, with valuable objects. In 2018 the villa is acquired by the businessman Paolo de Santis, who happens to be from Como. 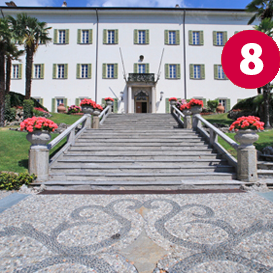 Generally known as the “Holy staircase” due to its steep gradient, this straight staircase connects Besana Street with Regina Street. The original stones of the staircase are well-preserved, and it is possible to appreciate the two different layings of the stones: the first one consists on stones laid diagonally at the same level to facilitate the sliding of a sort of sledge for transporting stones, timber and various goods to the port; the other part, which occupies one-third of the width, is paved for pedestrian use to prevent people from being run over by the sledges, and to facilitate the ascension back to the top. 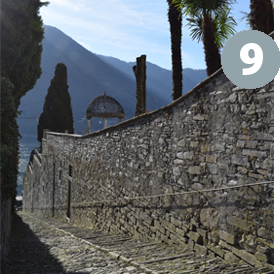 One of the numerous lookout points in Moltrasio from where you can admire a glimpse of the neighbouring villages and Lake Como. In particular, from this lookout point you can see Palanzo, Lemna, Molina, Faggeto Lario, Torno, Villa Tanzi Taverna, Villa Roda Roccabruna, Blevio, Brunate e Como. 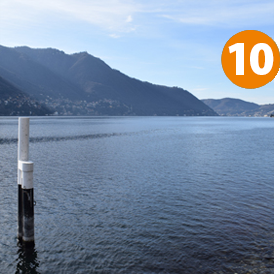